The definitive guide to Lash Extensions, including the difference between Classic and Russian Volume Lashes.

We’ve been meaning to do a post about this for some time now because there is just so much confusion regarding lash extensions! If we had a pound for every time we heard “I had semi-permanent lashes applied but they have ruined my lashes” or “when I had Hollywood lashes done last time they only took 20 minutes, why do yours take so much longer?”. Unfortunately all the confusion means salons can be misleading in what they are offering which results in further confusion and often gives lash extensions a bad name.
If you are a client of ours you will be aware we are obsessed with lashes in Pastille and are lucky enough to have some of the most talented technicians in Yorkshire work for us here. This post is by no means saying that we are the only place to get lashes or slating what other technicians are doing, we just know how difficult it is as a client to know what your actually getting and how to get the most out of your money.
So here it is, our attempt at the definitive guide to lashes…
Let’s start with the basics.
Strip lashes:
We’re sure most of you will know about strip lashes and most have probably faced that Saturday night battle of trying to get them to stick without ruining the rest of your eye makeup in the process! If you’re not one of those talented few that can apply them perfectly every time (and believe us it is a talent!) many salons offer the chance to have them applied professionally, often including the lashes in the price. This means they should then last the full night without coming away at the corners. If you’re lucky you might even get them to last till the next morning, however that would mean admitting you didn’t take up your makeup when you got home so we don’t know if that is technically a bonus… Either way do not expect these lashes to last for a weekend or short holiday – and if they do we’d be very concerned as to what glue was used! 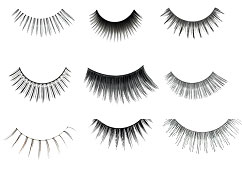 Cluster lashes / Party lashes:
Like strip lashes cluster lashes can also be applied at home or in a salon and can be bought in places like Boots or professional salon stores. Instead of being on one long strip with these you use tweezers to drop each cluster on top of your lashes spreading them evenly along your lash line. In our opinion (and most other professionals) the only glue that should be used with these types of pre-made clusters is that which you would use for strip lashes (DUO glue for example). Many salons offer these with various types of semi-permanent glue but we believe these types of lashes are far too heavy & thick to keep on more than a few days and could therefore damage your own natural lashes as they start to grow, especially as the clusters sit on several of your lashes instead of one.
This unfortunately is one of the biggest misconceptions when it come tolashes with many Technicians advertising this type of lashes as “semi-permanent” or even “volume” lashes and suggesting they last 2 – 3 weeks. The easiest way to avoid this is to ask to see the type of lashes they apply first and if they are already made into a cluster then they should not be used with semi-permanent glue. This can be done when you have your patch test (which of course all good salons will do!). See below if we haven’t already scared you enough! 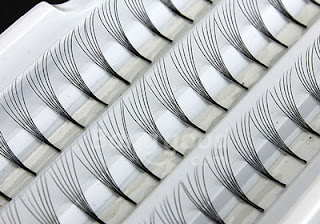 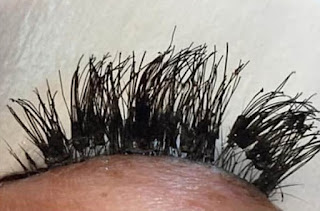 (This is what can happen if the wrong glue is used and clusters are left on too long!)
Express / Blink Individual Lashes:

These are the quickest way to have semi-permanent lashes applied in a salon. If done properly these are non-damaging and can look great however it is not a treatment we offer in Pastille. For this treatment individual lashes are applied on top of your natural lashes without isolating your own lashes first. This treatment only takes around 30 minutes for a set and should last up to 2 weeks however it is difficult to get as fuller look as with other types of semi-permanent lashes. Express lashes should not be infilled and instead should be professionally removed then reapplied if you want to keep up to them. The picture below is an example of a brand called Nouveau’s Express Lashes.

Individual / Hollywood / 1:1 / Classic Semi-Permanent Lashes:
These are the most common type of lash extension and are the type we have offered in Pastille for nearly 3 years. Carrying out this treatment requires a considerable amount of training and practice so be sure to check yourTherapist knows what they’re doing when choosing who to go to.  (Although everyone has to start somewhere so be patient with a Therapist who is newly qualified, often they offer discounts at first and provided they have been properly trained this is fine it just may take them much longer).
So the idea behind these lashes is that only one lash is applied to each one of your own. They are not dropped on as with express, each lash is isolated then a new lash is applied on top (see picture below). This means that as your natural lash grows out the false lash will grow with it and therefore not get tangled or damage your natural lashes. This also means that they can be infilled after the false lash falls off without building lashes up on top of each other.
These lashes are usually 0.15mm or 0.20mm so slightly thicker than your natural lash and come in various curls, lengths and materials such as synthetic, mink or silk. In Pastille we use silk but each type gives a different look. Clients often come to us and say they have heard about “mink lashes” and are under the belief that these are some kind of super incredible new type of lash but we believe this is another misconception probably stemming from “mink” sounding so glamourous! If applied properly we find silk to be the more superior material and is just as expensive to buy and is applied in the exact same method.
Depending on the the Technician individual lashes should take between 1hr15 – 2hrs. Any less than that and they are probably not being applied properly. The time varies too according to how many natural lashes you have. The idea is apply one false lash to every real lash so if you are very lucky and have lots of lashes you will be there for some time! We would expect these lashes to last anything between 2 – 4 weeks depending how quick your lashes grow and how well you look after them. We normally recommend an infill between 2 – 3 weeks. 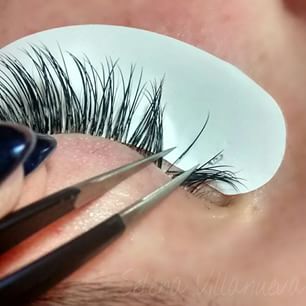 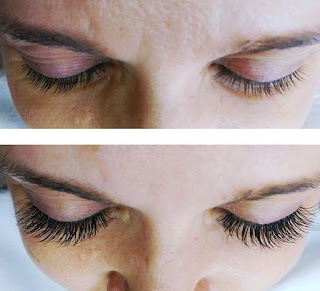 (A before and after of some individual lashes done in Pastille!)

Russian Volume lashes, as they are most commonly known, are the latest trend in the world of eyelash extensions and it’s not difficult to see why! They manage to make lashes look super glam and volumous whilst still remaining natural and subtle. This look is achieved very similarly to individual lashes in the sense that the natural lash is first isolated, then where previously Technicians would apply one lash, now they apply a small fan of anything between 2 to 7 lashes. This might sound like a lot however because the lashes that are used to make the fans are so fine (we use 0.07mm) the fans are actually more lightweight than one of the 0.20mm individual mentioned above. This means that again there is no damage to the lash and in our experience clients cannot feel the Russian Volume lashes at all when they are applied. It’s just like having your own lashes but lots more of them! It also means that these lashes can be infilled as they fall out.
An experienced Technician will know how strong your natural lashes are and therefore adjust the amount of false lashes in their fans according.These fans are nothing like the pre-made cluster lashes that we mentioned previously in this post as they are handmade by the technician there and then using tweezers (and a very very steady hand!). This procedure is extremely delicate and takes months and months of practice – imagine picking up 6 lashes 0.07mm in thickness with one hand whilst your other is keeping the natural lash isolated then trying to craft a fan out of them and you’ll understand why! Technicians most be 100% confident and trained in Individual Lashes before starting to learn this Russian technique and luckily we haven’t found any training courses that allow otherwise. That being said we have heard of Technicians not being properly educated in this style and in rushing to keep up with the trend are using fans made of 0.15mm lashes. This is far too heavy for your natural lashes and would undoubtedly cause them serious damageso again do your research when choosing a Lash Technician.
Another time-cutting technique we are seeing Technicians use (just to add further confusion to the issue!) are pre-made “fans”. Now these are not the same as clusters as they are not as heavy and are made up of 0.07mm lashes, however we do not think the effect is anywhere near asnatural as they have been glued twice (once on the fan and once to attach) which gives a bulky and unhealthy look.
An expertly applied set of Russian Volume can take anywhere between1.45 – 3 hrs to apply. As with Individual Lashes anything less than this and you should be concerned as to whether they are being properly applied and if your Lash Technician is putting a fan on every possible lash, as they should.
Clients often ask us what the difference is with the Classic Individual and the Russian Volume and we would firstly say that the Russian style allows the Technician to apply a more full volume-full set to clients who might have quite sparse lashes as they can apply more than 1 false lash to each lash. The finish is also much softer and fluffier and because they are so lightweight they look and feel much more like your own lashes and therefore generally last longer too. That being said, if you are lucky enough to have lots of lovely long natural lashes the Classic style may actually be more suited to you. Many clients also prefer to have a more false or dramatic look and again in that case Classic could be the way to go! 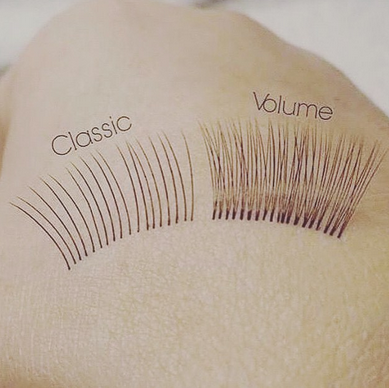 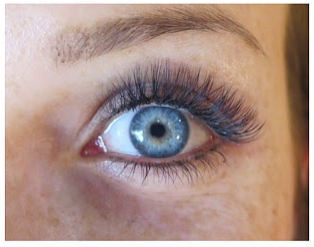 To conclude this mammoth post (if we havent lost you already!): lash extensions are amazing! However, as with many things in the beauty industry, there are Therapists out there who try to cut costs or time and end up damaging a treaments reputation. Provided you are have done your researchand if you’ve managed to read this whole post you probably know more thansome Lash Techs at this point, then the only thing you need to worry about is how insanely addictive they are!If you have any more questions or disagree with anything we’ve said please feel free to leave a comment. We’re not saying we know everything there is to know or what we’re saying is gospel, just merely offering advice for those trying to make sure they get the best value for money and don’t end up with ruined lashes!*one last thing! NO you cannot wear mascara with lash extensions! And yes, they are completely waterproof (including swimming, waterparks etc), just don’t rub them or pick them or put anything oily anywhere near them, or sleep on them – basically just admire them from afar!

*some Lash Techs recommend cleaning your lashes with a soloution such as baby shampoo and water however it is best to ask at your Tech as opinions vary on this.